◆The synthesis of 7-hydroxyquinoline 1 involved the Michael addition between 4 and 2. Acrolein 2 is vulnerable to polymerization under reaction conditions (Et3N/MeOH, 0°C). As a result, the synthesis required a large excess of highly toxic acrolein and a chromatographic purification was necessary to remove N-tosyl-5-hydroxyhydroquinoline regioisomer and polymeric impurities. 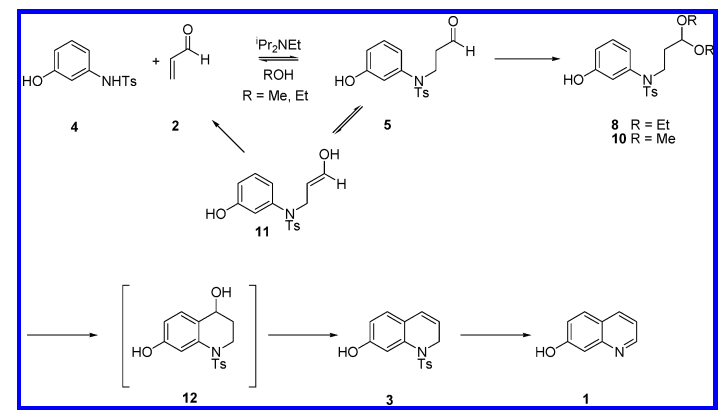 ◆The polymerization issue could be mitigated by conducting the reaction at a lower temperature.

◆The first Michael reaction of 3-N-tosylaminophenol 4 with 2 was conducted at −5°C in ethanol. This lower reaction temperature greatly limited the formation of polymeric materials, which made the subsequent workup much easier.

◆In addition, in order to solubilize polymeric materials that otherwise adhere to the precipitated product, a small volume of toluene was added to the reaction mixture prior to pH adjustment.

◆In general, dilute reaction conditions are preferred for an intramolecular reaction in order to suppress undesired intermolecular reactions. For instance, Nazarov cyclization had to be conducted at a fairly high dilution (0.2 M) using concentrated sulfuric acid as the solvent to prevent polymerization of enone 17